Setting up a Docker Registry

The easiest part of setting up a Docker registry is that the application runs in a container. First lets create a Docker server in Azure w/ docker-machine

Now that our Docker client is pointed to the Azure Docker host let's load up the Docker registry container.

Note: There are additional steps to secure this registry and make it public facing that involves getting a certificate from a CA authority. For the purposes of this blog post I am going to set my Docker clients to ignore using an insecure registry.

Run the following commands to create a Docker registry container.

To ensure that the docker client is still not pointed to the server running the registry container run a docker ps to make sure the registry does not show up under images. As menitoned in the note above we are going to set our Docker daemon to allow insecure registries. In order to do this edit the /etc/default/docker file and modify the following commented line from

Now that we are insecure :) , lets restart our Docker daemon and pull down the official ubuntu:latest image and reupload this image as anugup-ubuntu to our Docker registry.

Now that we have our fun insecure Docker Registry setup lets see how much faster our deployments are compared to pulling from the public Docker Hub. The following is a picture representation of the Docker Swarm I have running in Azure below. Important: I have configured each of my swarm Docker hosts to also accept images from insecure-registries for the purpose of this blog.

In addition to the Ubuntu image I have also upload CentOS, MySQL, Busybox, Redis, and Node images to my Docker registry running in Azure. To add additional images follow steps from above detailing ubuntu, and replace 'ubuntu' image name as necessary

First lets switch our Docker client to point to the swarm master. eval $(docker-machine env --swarm anugup-swarm-master). Now when we run a docker pull our swarm pulls that image onto each and every node. For example running a docker pull DOCKER_REGISTRY:PORT/IMAGE_NAME brings up every node in the swarm, and an appendation of ...: download once the download on that node is complete.

To get an accurate comparison of the pulls between my private registry running in Azure, and the public registry Docker hub has I am going to make use of the following script. This script is in bash, and does the following

When looking at the time saved from having a Docker Private Registry, we do not see any groundbreaking speeds come into the mix.

In addition to storing the Docker images locally on the Docker host, the Docker Registry can also be configured to make use of Azure Storage, Amazon Storage, Google Storage, etc. In order to set this up we simply need to redeploy our Docker registry container with additional options.

Point the Docker client to the Docker Registry host eval $(docker-machine env anugup-dreg). Stop the current Docker registry container: docker stop REGISTRY_CONTAINER. Once stopped run the following command to start a new Registry that is using Azure storage to house your enterprises images. The storage account name can be found in the panes of the Azure portal or through the Azure-cli. The storage key is the keys button in the Azure portal, or also found through Azure-cli as well. In case you forget -- Stack Overflow is awesome

Once this is up and running we can run through the same bash scripts from above, with no changes needed. Here are the new metrics for the following images: ubuntu, centos 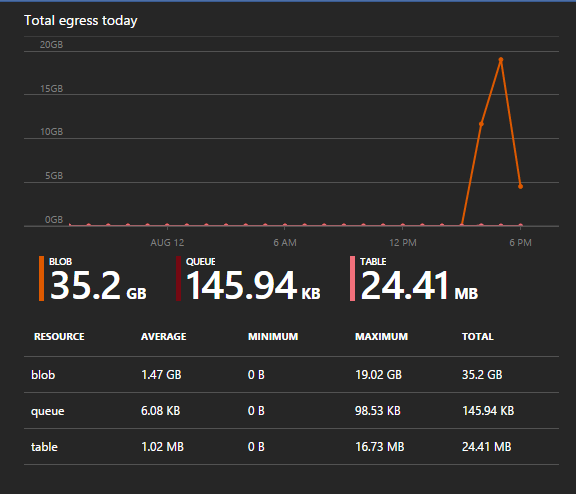 Altogether using a private Docker Registry in Azure shaves off a couple seconds for pulling an image in your docker swarm. There are definitely optimizations that can be done here such as premium disk in Azure - but I'll leave that for others to tell.

Enter your email
Subscribe
Splunk Enterprise [https://splunk.com] is a leading product for IT where Administrators, Security Operations, and Developers can send data from almost anywhere into a real-time analytics pipeline to correlate and diagnose events. If you are like me and you want to try Splunk out to get a feel for
Ok lets go ahead and quickly get started. I am including the time this blog takes to read as part of the five minute setup. Quick Background Dockers is a first class panting solution built for the Linux sysadmin- jk. Didn't think we had times for jokes in these five
Kitematic is a new player in the Docker arsenal, and fully featured with Docker's release of the new Toolbox. Kitematic has two basic principles 1. Give everyone a streamlined process to spin up and try Docker on their local machine 2. Bring a delightful UI experience to the the container